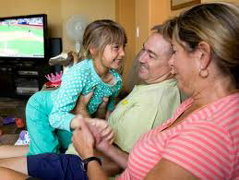 You know all the reasons why you should turn off the TV: too much of it makes you less likely to be at a healthy weight, it’s addictive, it robs you of time you could be spending on contributions you could be making to society, it promotes a lack of action on your part, it can ruin a relationship…the list goes on and on. A motivational speaker claims that deciding to cut out his late night television viewing and using the saved time instead in the mornings helped him to write an entire book. So, as he says, instead of watching other people live out their dreams every day, go out and live yours. Here’s how to take back your life:

Begin by finding something to fill the void television will leave in your life. There’s nothing worse than giving up a bad habit, only to have no direction in which to head. That’s how bad, or worse, habits are formed. Plan ahead and decide now what you will do with all the time you will gain from not having this habit anymore. And choose something that will make you happier. There is no point in taking away something you thought was recreation and replacing it with more of the same, like playing Minesweeper.

Limit your television viewing to only one and a half to two hours a day. That’s generally enough for a movie you may really wish to see. If you know you only have a couple of hours to watch TV, you’ll be more careful about what you watch. How many times have you watched something you really didn’t enjoy that much, just because it was the only thing on?
Cut down on the amount of time you spend watching television. Get more involved in the other activities in your life. Spend time with your family, make new friends, volunteer, go to an event downtown, take a class just for fun, or find something else you could be doing that expands your world. Be brave when you choose your alternative activity! The smallest contact can open the door to possibilities you’ve never even considered.

Finally, you can stop watching television altogether. Unplug the TV and put it in a closet or attic; it needs to be somewhere it won’t be on your mind. You have a new life now, and the TV is not a part of it because your life is simply too full.

Online guide to Internet to parents and children for family

Online guide tips for the family forced to face divorce

Guide online of tips for girls clothing on the firsts dating

Guide help with 10 tips for fathers and child relationship

Guide by age for feeding the children and tips for sleeping

List Gift Ideas Valentine’s Day much sought after for…

Guide to the relationships with the advice for women single