News and events from the world: Serbia is invaded by insects

News from the world: Serbia is invaded by insects. An insect invasion is hitting the city, for health authorities is it is a natural phenomenon. 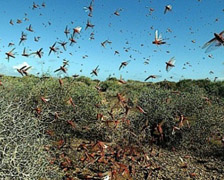 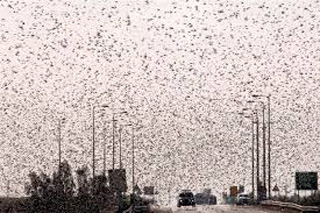 News and events from the world: Serbia is invaded by insectsA strange phenomenon has been registered in Serbia, near the town Kraljevo.
An insect invasion is hitting the city, for health authorities is it is a natural phenomenon due to the weather.
The prophets of doom will pull dancing in the biblical Book of Revelation where it is written:

1 And the fifth angel sounded, and I saw a star fallen from heaven to earth. He was given the key of the bottomless pit;

2 And he opened the bottomless pit and from the shaft rose smoke like the smoke of a great furnace, and darkened the sun and the atmosphere.

3 from the smoke came locusts on the earth, and unto them was given power, as the scorpions of the earth.

4 They were told not to harm the grass growth or any tree, but only those men which have not the seal of God on their foreheads.

5 And they were not permitted to kill anyone, but to torment them for five months: and their torment was as the torment of a scorpion when it stings a man.

6 In those days men will seek death and will not find long to die, but death will flee from them.

7 of the locusts were like horses prepared for battle. On their heads were crowns like gold, and their faces were as the faces of men.

8 And they had hair as the hair of women, but their teeth were like those of lions.

10 They have tails like scorpions, and stings. In their tails: and their power was to hurt men five months.

11 Their king was the angel of the Abyss, whose name in Hebrew is Abaddon, Apollyon in greek.
Of course, no one believes in these fables misinterpreted, but one thing is for sure, the citizens will not be happy with the minor inconveniences that are bringing these insects.
And what do you think? Again, to you the judgment, you can find more articles and insights, with tips and information in the new age category, you can share this article on the social, thank you for choosing this site and good navigation.